If you buy through a link on my site, I may earn an affiliate commission at no extra cost to you. Learn more.
By Alex
Last updated on April 1, 2022 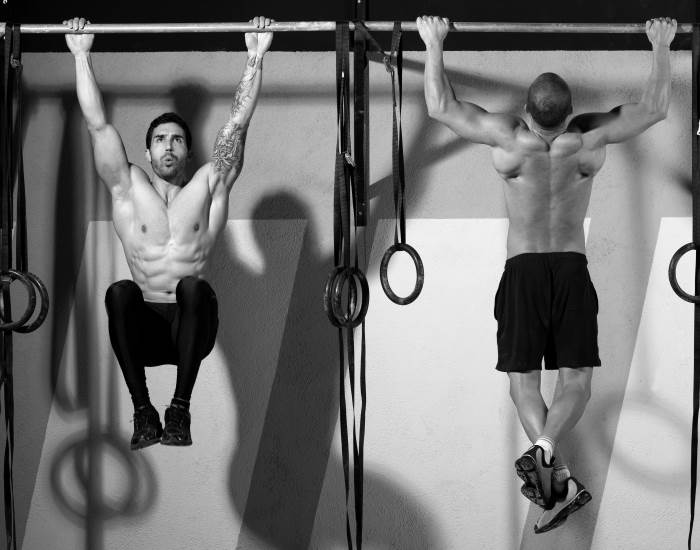 This post contains 23 different pull up variations. Eight of them will help you if you’re too weak for conventional pull ups. The other 15 add a level of difficulty to pull ups for those who have mastered the technique.

Tip: Use one or two of these pull up variations if you are not yet strong enough to do many/any conventional pull ups. Before you know it, you’ll be able to do several pull ups with no assistance at all.

Chin ups are like pull ups, but with one difference: your palms face towards you, rather than away from you. Chin ups are challenging, but noticeably easier than pull ups, which makes them great for building your strength on pull ups if you can only do a few pull up reps.

Hold yourself up for as long as you can in the top position of a pull up or chin up (chin over the bar, arms bent and elbows in line with your hips from a side view). If you’re too weak to pull yourself up, stand on a chair or stool to help get into position.

This is just like chin ups/pull ups, except you use parallel handles that allow you to use a neutral grip (palms facing each other). Like chin ups, hammer grip chin ups are a little easier than pull ups. As such, it’s a good exercise to do when you can do just a few pull ups.

This pull up variation entails generating momentum by swinging your hips, legs, and arms to bring you through the motion. This variation is best if you are already capable of doing a couple reps of regular pull ups.

to the pull up bar so one end of the loop is hanging down. Put one foot or knee into the loop to create tension and effectively reduce your body weight. Perform as many pull ups as desired. The band helps the most at the bottom of the rep, which is often the most difficult point in the motion. Use stronger bands to start off with, and work your way to weaker bands as you progress.

Jump into the positive positive rep of a pull up. The idea is to create enough momentum to get to the top of the motion. Once there, concentrate on performing the negative rep by slowly lowering yourself down. Repeat. If the jumping part is too difficult for you, or if the bar is too high, then get a chair or bench to stand on to reach the bar so you can perform just the negatives. This pull up variation is nice because you get to train the basic pull up motion on the positive rep (with a reduced load from the momentum), while getting used to your full body weight on the negative rep.

Set the weight stack to the desired level. The heavier the weight setting, the easier the movement. Grasp the bar and step (or kneel) onto the sliding platform, and perform your set of pull ups. This pull up variation is inferior to band-assisted because it doesn’t require as much stabilization work. Plus, your body is more vertical than it would be on band-assisted or conventional pull ups. That said, this variation still has merit, as it can strengthen the major muscles involved in pull ups, and get you accustomed to the basic vertical pulling motion.

Set the stack to the desired resistance. Sit down and set the knee pad over your lower thighs to keep you anchored. Grasp the bar and pull the bar down to your chest, then go back to the top. Repeat. Lat pulldowns only mimic a fraction of the necessary movement for pull ups, since you remain seated and don’t utilize the stabilizing muscles. And so, lat pulldowns will help improve your pull up strength, but progress will be slower if not done in conjunction with one of the above variations. Note: Although lat pulldowns aren’t the best pull up variation, they’re great for adding mass to your lats.

Use these pull up variations if you’ve already mastered the conventional pull up technique and want to challenge yourself.

Simply add weight to your body and perform the pull up movement. I prefer attaching weight to my body with a dip belt. However, there are other methods: use a weight vest, hold a dumbbell between your ankles or put on a backpack full of weights.

Put a heavy dumbbell on the floor, under the pull up bar. Attach one end of a resistance band around the dumbbell handle. Loop the other end around your waist, or wear a weight lifting belt and attach it to the belt. Then perform your pull ups. The resistance band will make the movement increasingly difficult as you get closer to the top of the movement.

This is the same as the conventional pull up, but with a wider grip. It targets the lats much more intensely. Some people prefer using the angled pull up bars when doing wide grip pull ups, while others prefer a straight bar. Note: your range of motion will decrease compared to the conventional technique since your arms are further apart, meaning you won’t be able to bring your chin up as high.

This pull up variation involves pulling your chest to the bar, as opposed to just pulling your chin over the bar. It requires a lot of explosiveness to pull yourself this high. If you have trouble doing this with strict form, try integrating the kipping motion (swinging your hips and legs) to generate momentum. However, your eventual goal should be to do it without momentum.

Pull yourself up with so much explosive power that you’re able to release your hands once your chin passes the bar and have your body continue to go up. Clap your hands as you reach the highest point. Grab the bar as you begin to go back down. You may need to the kipping motion when learning this pull up variation in order to explode up with sufficient speed/power.

Stand under the bar, such that you’re facing one end of the bar with your back toward the other end. Use a mixed grip (one hand over, on hand under) with your hands close together. Pull yourself up to one side until your chin is at bar height, then lower yourself. You can alternate sides every other rep, or you can do all reps on one side, then switch sides and do the same number of reps.

This pull up variation integrates grip strength training into the mix. Get a towel and fold it in half over the pull up bar. Grasp each side of the towel and pull yourself up until your chin is higher than your fists. Lower yourself back down and repeat. Tip: For a wider grip, use two towels – one for each hand – spaced as far apart as desired.

This is the exact same exercise as the towel pull up, but with thick rope.

Instead of gripping the bar with a normal overhand grip,  grip it with the tips of your fingers. Start out by using 4 fingers per hand, then 3, 2, and 1 as you progressively get stronger. Like towel pull ups and rope pull ups, this pull up variation is another great technique for increasing your hand and grip strength.

This variation involves moving your body between 3 points. Start from a dead hang and pull yourself diagonally up and to the left. Then shift your body as far as you can to the right. Finally, lower yourself back to the starting point. Repeat the motion, starting with the right side first. Tip: When you’re at the top, you can go back and forth between left and right side multiple times to make the movement more challenging.

This exercise is essentially the combination of a pull up and a dip. You begin in the normal starting pull up position: arms straight, hanging from the bar. Then explosively pull your body up. As you reach the top of the pull up, pull your chest forward and swing your elbows up until they’re higher than your wrists. Then execute the dip motion by extending your arms until they’re straight. Lower yourself back to the starting position, and repeat. When starting this exercise, you’ll probably have to use the kipping motion to get enough momentum to bring yourself over the bar. But eventually, it’s possible to do muscle ups with minimal momentum.

22. Assisted One Arm Chin Up/Pull Up

Grasp the bar with one hand, using an overhand or underhand grip (it’s best to train both). Use your other hand to grasp onto the wrist of the hand holding the bar. Pull your body up until your chin is over the bar, then lower yourself. As you get stronger, you can make this exercise harder by grasping further down your arm (i.e. moving from your wrist to your forearm, bicep, then shoulder).

Grasp the bar with one hand using an overhand or underhand grip (train both, but start with the underhand grip). Then pull yourself up until your chin is over the bar. Note: This will take a lot of practice, and you’ll have to go through a few progressions (see this video) to build your way up to a full one arm chin up/pull up.

Author
Alex
Hey! My name is Alex, and I'm the owner and author of King of the Gym. I started this website back in late 2009 during college, and it has been my pet project ever since. My goal is to help you learn proper weight training and nutrition principles so that you can get strong and build the physique of your dreams! Read more about me here.
Share18
Pin3
Tweet
21 Shares