The gastrocnemius (G. gaster, belly ; kneme, leg.), or “gastroc” for short, is the largest muscle in the calf, which acts on both the ankle and knee joints.

It shares the role of prime mover in ankle plantarflexion with the soleus, but only when the knee is straight. The gastroc becomes less active the more the knee joint is bent.

Classified as part superficial posterior compartment of the leg, the gastrocnemius lies superficial to the soleus and is responsible for the vast majority of the visual impact of the calf.

Note: The gastroc and soleus are collectively known as the “triceps surae,” meaning “three-headed muscle of the calf.” This is because they perform the same action and share the same insertion.

The gastrocnemius has two heads: the lateral head and the medial head, which is the longer of the two.

The fibers of each head mirror each other as they travel obliquely toward the central tendon separating them, creating a bipennate fiber arrangement.

Note: The chart below contains direct gastrocnemius exercises only. However, the gastroc is trained indirectly in hamstring exercises. 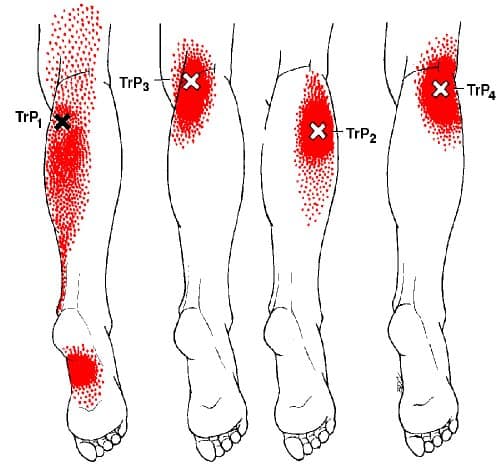 Author
Alex
Hey! My name is Alex, and I'm the owner and author of King of the Gym. I started this website back in late 2009 during college, and it has been my pet project ever since. My goal is to help you learn proper weight training and nutrition principles so that you can get strong and build the physique of your dreams! Read more about me here.
Share
Pin61
Tweet
61 Shares