If you buy through a link on my site, I may earn an affiliate commission at no extra cost to you. Learn more.
By Alex
Last updated on October 28, 2019 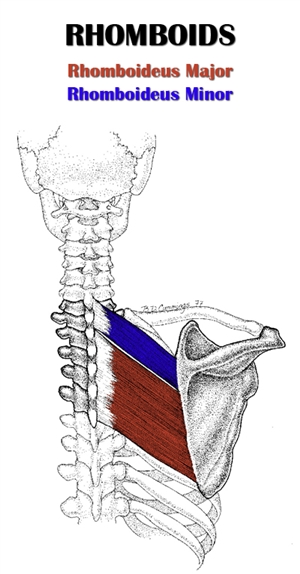 If you took geometry, you might’ve guessed that they’re named after the rhombus shape, which they both resemble.

Acting on the shoulder blades, both of these muscles are prime movers in scapular retraction and scapular downward rotation.

The rhomboids are part of the deep posterior axioappendicular (extrinsic shoulder) muscle group.

They’re situated inferior to the levator scapulae, superior to the lats, deep to the middle trapezius, and superficial to the serratus posterior superior and thoracic spinal erectors.

The rhomboids originate from the lower cervical and upper thoracic vertebrae.

The parallel-oriented fibers of both muscles run inferolaterally and insert on the medial border of the scapula, forming flat quadrate muscle architectures.

Note: The table below only includes exercises featuring scapular retraction, since that is what targets the rhomboids most directly. These are the exact same exercises that target the middle trapezius.

The rhomboids are trained more indirectly in rear deltoid exercises and lat exercises.

These are the same techniques use to stretch the middle trapezius fibers. 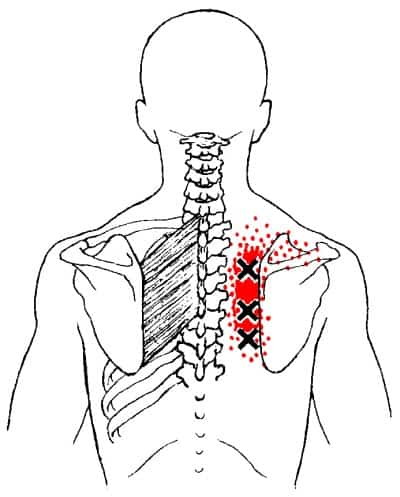 Author
Alex
Hey! My name is Alex, and I'm the owner and author of King of the Gym. I started this website back in late 2009 during college, and it has been my pet project ever since. My goal is to help you learn proper weight training and nutrition principles so that you can get strong and build the physique of your dreams! Read more about me here.
Share9
Pin138
Tweet
147 Shares