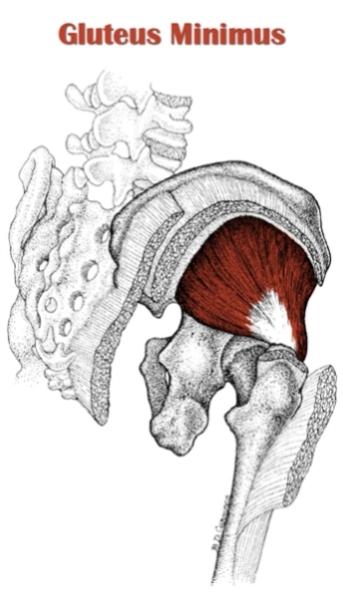 The gluteus minimus (G. gloutos, buttock. L. minimus, smallest) is the smallest and deepest of the three buttock muscles. Its primary responsibility is hip abduction.

It is like a mini version of the gluteus medius, sharing a similar shape, location and function.

The gluteus minimus constitutes part of the superficial gluteal region.

It is in the deepest layer of muscle on the outer hip, lying deep to the gluteus medius and situated anterosuperior to the piriformis.

It originates from the external surface of the ilium. Its parallel-oriented fibers run inferomedially from either end of the muscle toward its midline.

They converge on the anterior greater trochanter, creating a fan-shaped, or radiate muscle architecture.

Note: The following techniques are the same as those used to stretch the gluteus medius.

Note: Since the gluteus medius and minimus are so similar in function, they cannot be trained separately. And if one is dysfunctional, the other one probably is, too. As such, for the gluteus minimus training notes below, I’ll refer you to the relevant information for gluteus medius:

Author
Alex
Hey! My name is Alex, and I'm the owner and author of King of the Gym. I started this website back in late 2009 during college, and it has been my pet project ever since. My goal is to help you learn proper weight training and nutrition principles so that you can get strong and build the physique of your dreams! Read more about me here.
Share1
Pin14
Tweet
15 Shares