Leg Anatomy: All About the Leg Muscles 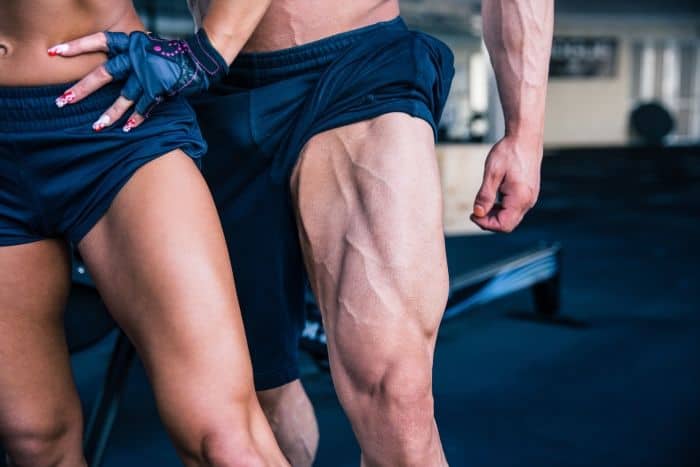 I’ll give you a little hint before you continue on: the leg muscles are not as simple as just the quadriceps and hamstrings.

Specifically, this page discusses all the major muscle groups of the upper leg. In other words, this page excludes information about the calf muscles…

…You can read about the calf muscle anatomy here, if you are interested.

The leg anatomy is so complex, containing both the knee and hip joints. The hip joint allows you to move and rotate your legs pelvic area in all directions. The knee joint enables the movement of bending and straightening your legs.

It’s important to understand that greater range of motion and rotational freedom naturally lead to a higher chance of injury through increased use. This is why the old folks home is chock full of old people with metal hips and knees!…

…Which alludes to one major reason why you should understand the leg anatomy: to prevent injury. Of course the other reason is to build muscular legs that you could move mountains with – A little more short-term and narcissistic, but a great reason nonetheless.

That said, lets get on to the first step by understanding all the different movements made possible by the mechanics of the leg muscles and their respective joints…

Functions of the Leg Muscles

There are several muscle groups in the upper leg anatomy, each of which contains multiple individual muscles.

The muscle groups can work independently for specific movements. However, many of the leg muscles share functions with other leg muscles. And so they work together to carry out larger, more “natural” movements; this is why there is much overlap in terms of muscle groups worked, between the different compound leg exercises.

List of All Leg Muscles’ Functions. The following list contains a description of all of the possible functions of the muscles in the leg anatomy. I’ll try to explain each movement by describing it in more universal terms instead of simply listing an exercise, which may be ambiguous or altogether unfamiliar to some.

Refer to the above list when reading about the individual muscle groups of the leg anatomy, below. While I will list the functions, I will not repeat the descriptions.

Now, let’s get to learning about the many muscles in the leg anatomy…

The Hamstring Muscle Attachment Points. They all originate from the ischium (sitting bones), and insert into the tibia. That is, all except for the short head of the biceps femoris; it originates from near the head of the femur (thigh bone) and inserts into the fibula (calf bone).

Overall Hamstring Functions. They are mainly responsible for knee flexion as well as hip extension. 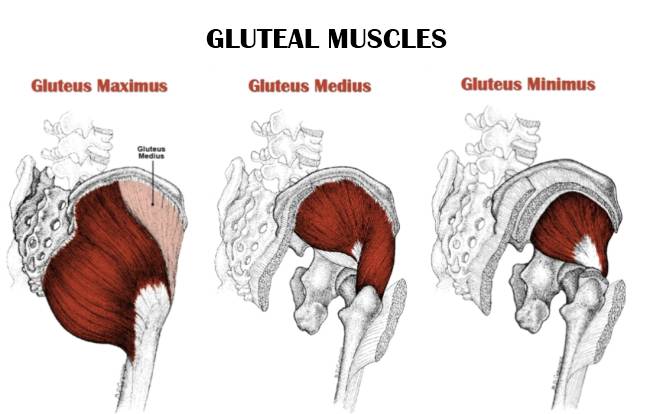 Here’s a quick fun fact for you – The gluteus maximus is not only the largest muscle muscle in the leg anatomy, but it’s the largest in the entire body.

The Gluteal Muscles’ Attachment Points. The attachments of the gluteal muscles are relatively complex. Each muscle head originates from either the ilium (highest bone on the pelvis), lumbar fascia (thick sheet of fibrous muscle in the lower back), sacrum (a triangular bone at bottom of spine near the tailbone). And each muscle inserts into femur (thigh bone) or the iliotibial tract (the IT Band – a long fibrous tissue that travels down the femur).

Overall Functions of the Glutes. The major roles of the glutes are to perform:

Glutes Exercises. The best exercises for targeting the gluteal muscles include:

Hip Abductor Muscles’ Attachment Points. The attachment points for the gluteals were explained above. The tensor fasciae latae originates from the ilium (highest bone on the pelvis) and inserts into the tibia (shin bone).

Main Function of the Hip Abductors. Although the muscles that are considered to be hip abductors have other functions, their function in this context is – drumroll please….

Hip Adductor Muscles. The hip adductors are located on the inner thigh region of the leg anatomy. They are a small, specific muscle group that contains 3 individual muscles:

Hip Adductor Muscles’ Attachment Points. All three of the adductors originate from the pubis (pubic bone) and insert into the femur (thigh bones). Note that the posterior head of the adductor magnus inserts into the ischium (sitting bones).

Overall Function of the Hip Adductors. The roles of the hip adductors include:

Note that there’s rarely a need to perform these if you’re doing a good weight lifting routine, which should sufficiently stimulate the hip adductors by way of compound leg exercises.

Iliopsoas. The hip flexors refer to a group of muscles in the frontal-hip area of the leg anatomy. Although there are others, the iliopsoas is the main muscle group that is associated with the “hip flexors.”

The “Other” Hip Flexor Muscles You see, the hip flexors are more like a “group of muscles” rather than a muscle group – if that makes sense. For example the rectus femoris is officially a quadriceps muscle, although it’s grouped here due to it’s hip flexion function. 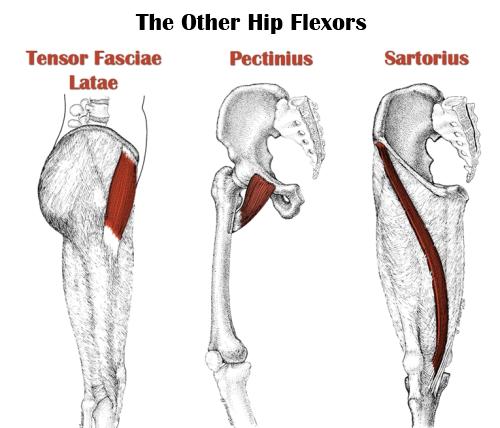 Main Function of Hip Flexor Muscles. The Iliacus and the other muscles that make up the hip flexors have an array of functions. But the functions we care about in this context is, you guessed it…

Hip Flexor Exercises. The exercises that most directly work the hip flexors include:

Shortened, tight and inflexible hip flexors are on the rise. This is largely a result of the modern lifestyle, which is characterized by too much sitting and a lack of stretching. The result is flexibility issues, postural problems and lower back pain…

…But this doesn’t mean that you should avoid exercises that involve the hip flexor muscles. Instead you can counteract the hip flexor tightness by forming habits out of these two simple tips:

This wraps up my synopsis of the leg anatomy. If you haven’t already done so, be sure to visit the links at the end of each of the above section to get an in-depth and satisfying understanding of each muscle group within the leg anatomy.

Author
Alex
Hey! My name is Alex, and I'm the owner and author of King of the Gym. I started this website back in late 2009 during college, and it has been my pet project ever since. My goal is to help you learn proper weight training and nutrition principles so that you can get strong and build the physique of your dreams! Read more about me here.
Share22
Pin32
Tweet
54 Shares

18 thoughts on “Leg Anatomy: All About the Leg Muscles”