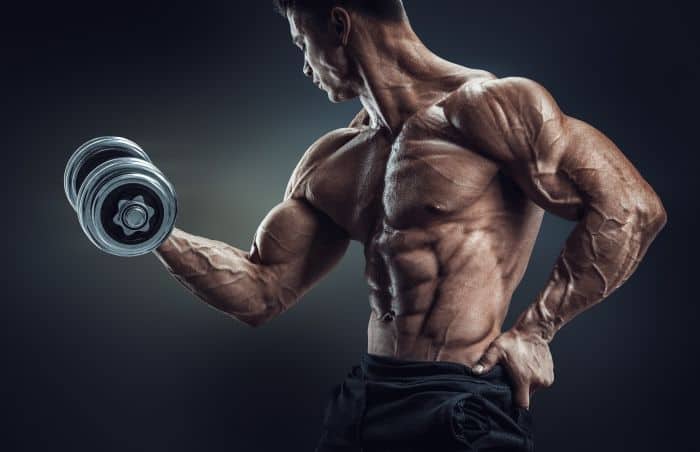 This biceps training guide contains all you need to know to build bigger biceps. Learn useful tips and avoid common mistakes when training your biceps.

The biceps can be a stubborn muscle group, but I’ll teach you how to force them to grow.

Despite being one of the smallest muscle groups, the biceps are the most likely of all muscle groups to be obsessed over by the average gym-goer…

…Which makes sense, really. I mean, what kind of guy doesn’t want to build bigger biceps and tote guns with peaks higher than Mt. Everest?

Developed biceps are like an exclamation point on your physique! They add a “wow” factor; plus they draw attention to the triceps, shoulders and chest.

Read on to find out exactly how to realize your goal of having bigger biceps.

Here are my picks for 5 best biceps training exercises:

Read my article on the best biceps exercises to find out the how-tos and benefits of each of these movements.

In order to best understand how to train the biceps, you should have a good grasp on their functional anatomy. I suggest reading through this biceps anatomy guide, as well as the links below.

The biceps includes two different muscles, which work together to flex your arm by bending at the elbow joint. These two muscles are:

Why Do Your Biceps Suck?

I distinctly remember a certain floormate of mine saying, “Yo brah I’m doin the south beach workout…chest and bi’s 5 times a week!” After I laughed my nuts off, I realized just how seriously some people take biceps.

Nine times out of ten, though, the best approach for most individuals is to limit direct (i.e. isolation) biceps exercises.

Although it may seem counterintuitive, the fact remains that a disproportionate focus on getting “HYOOGE” biceps will only lead to poor training and, in the best case scenario, slightly bigger biceps.

Instead, your primary objective should be to focus on performing heavy compound lifts that indirectly stimulate the biceps.

Form Comes First. You can train your biceps using the perfect weight lifting routine with all the right exercises, but they won’t grow one bit unless you perform the exercises with proper technique.

The following technique tips are relevant to all biceps and “biceps-friendly” compound exercises, unless otherwise noted:

Don’t Swing. This form flaw takes the cake when it comes to totally butchering an exercise. It’s all too common to see inexperienced trainees cheat by swinging their bodies to complete reps, while looking like a complete goon in the process.

Slow Negative Repetition. You must be able to control the weight on the way down. Try for a ~2 second tempo when lowering the weight on all isolation exercises. However, it can be less for heavy compounds (especially deadlifts) as long as you are able to maintain control of the weight.

Fast(ish) Positive Repetition. The lifting portion should ideally be done faster than the lowering portion. Aim for a ~1 second positive rep on isolation biceps exercises. For “biceps-friendly” compounds, you should explode upwards, meaning that you lift it as fast as possible.

Squeeze the Biceps When Approaching the Top of a Rep. Try squeezing the biceps muscles just before reaching the top of a rep, as well as when you are at the top. No, this won’t make a world of difference, but it can provide the following benefits.

What’s the Best Biceps Training Strategy for You?

Keep It Simple, Stupid. Keep in mind that the simpler a workout, the better it usually is. And it doesn’t get much simpler than a few of the major compound exercises. Let me explain:

Biceps Training in a Nutshell. To generalize, beginners should limit or avoid direct biceps training altogether. But, as I’ll explain later, more advanced trainees can benefit from isolation arm exercises.

If you’re a beginner and wondering why you can’t, or at least shouldn’t do isolation biceps training (i.e. any type of curl), then you’re in luck because I’m about to tell you :-D.

Avoid Direct Biceps Training. The reasons why beginners should avoid isolation exercises for the biceps:

Now, I’ll be more proactive and tell you what you can do to ensure you realize your maximum biceps muscle growth:

Do More Pull Exercises. If there were to be anything that might give a beginner the edge for building guns, it would be to choose a weight lifting routine with slightly more compound pull movements.

Perform “Biceps-Friendly” Compounds First. “Biceps-friendly” refers to the compound pull exercises that target the biceps the best. In my opinion, the best example is chin-ups.

Sometimes, Less Is More. Believe me, there are plenty of guys out there who focus solely on strength training or powerlifting and have never even done a set of biceps curls in their lives. Yet they still have massive arms. And, there is certainly such a thing as too much biceps training. The following advice might be of help to many struggling in “the arms race.”

But what if you’re past the beginner stage, and realize that your arms a lagging body part? Consider the following:

First, Try the Beginner’s Tips. Even if you’re not a beginner, any of the tips outlined in the beginner’s section could be all that you need to amplify your biceps size.

If, of course, you’re already using all those techniques, check the other tips below.

Rep Range. Since your aim is muscle growth, I’d recommend an 8-12 rep range if you’re not doing that already.

Do More Biceps Work. After a certain point, you may need to work the biceps more.

Dedicate a Workout to Arms Only. The final tip is to add a day that is dedicated to arms. It’s most common to have an arm specialization day that combines triceps and biceps training.

My two most important points in this guide are:

Isolation biceps exercises can be very effective, but only when used properly by the right type of trainee.

If you are a beginner, do not waste your time with direct, isolation biceps training. That is, unless you’re doing just a minimal amount to make your workouts more fun so you’re motivated to go to the gym.

If you’re past the beginner stage, then you are a good candidate for direct biceps exercises.

Author
Alex
Hey! My name is Alex, and I'm the owner and author of King of the Gym. I started this website back in late 2009 during college, and it has been my pet project ever since. My goal is to help you learn proper weight training and nutrition principles so that you can get strong and build the physique of your dreams! Read more about me here.
Share2
Pin18
Tweet
20 Shares