The upper trapezius (G. trapeza, four-sided or four-legged table.) refers to the uppermost section fibers on the trapezoid-shaped muscle pair known as the trapezius.

The upper trapezius fibers span from the top of the upper back to the base of the skull, and act on the scapula and cervical spine, with their biggest role as the prime mover in scapular elevation.

The upper trapezius fibers originate from the lower rear part of the skull, and along the cervical spine until the 7th cervical vertebrae.

From this broad origin, the parallel-oriented fibers upper trap fibers run inferolaterally and converge on the far end of the clavicle. The upper fibers, along with the rest of the trapezius, form a radiate muscle shape.

The upper trapezius is what people associate with the trapezius. This makes sense. They jut up from the shoulder and are visible both the front and back. But they’re really just the tip of the iceberg, so to speak: The middle and lower traps make up the majority of the trapezius.

*Note: “Upper cervical” movements refer to movements, which only takes place at the atlanto-occipital and atlanto-axial joints (i.e. two uppermost joints of the cervical spine. Whereas, “cervical” movements refer to movements of the entire cervical spine. For example, “upper cervical extension” is just cocking the head back while keeping the rest of the neck fixed; “cervical extension” is shifting the entire neck back

Note: The chart below only includes the exercises that most directly target the upper trapezius (i.e. shrug variations).

When using these techniques, give special attention to the trigger points labeled TrP1 and TrP2 in the image below. 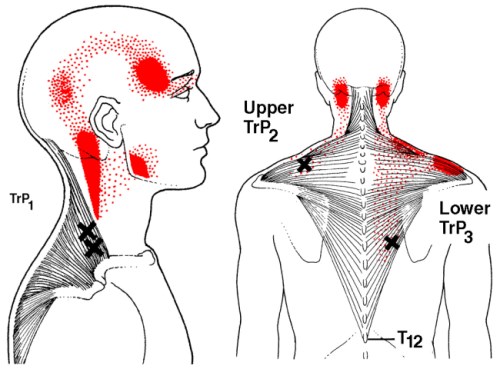 Author
Alex
Hey! My name is Alex, and I'm the owner and author of King of the Gym. I started this website back in late 2009 during college, and it has been my pet project ever since. My goal is to help you learn proper weight training and nutrition principles so that you can get strong and build the physique of your dreams! Read more about me here.
Share4
Pin47
Tweet
51 Shares