The rectus abdominis (L. rectus, straight ; abdo, to hide) is a long muscle pair located front and center on the torso. It’s named after the straight, vertical direction of its fibers relative to the midline of the body. 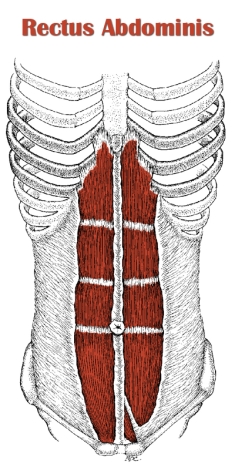 It acts on the spine, with its main role being the prime mover in spinal flexion.

Notably, it also plays an important role spinal stability thanks in part to its role in increasing intra-abdominal press. Plus, it assists in forced expiration.

When you think of “six pack” abs, you’re really thinking of the rectus abdominis. How do the abdominals get this distinct shape? I’ll explain:

The left and right ab muscles are separated vertically by the linea alba. Three (sometimes four) tendinous intersections run horizontally across each rectus abdominis muscle. Together, the vertical and horizontal divisions are responsible for the six (sometimes eight) pack on anyone with a low enough body fat percentage.

The rectus abdominis is the most medial muscle in the anterolateral abdominal wall, situated to the inside of the internal/external obliques and transversus abdominis (TVA).

While the muscle itself is superficial in that it’s not covered by other muscles, it lies deep to the aponeuroses of the internal and external obliques (it is superficial to the TVA aponeurosis above the so-called arcuate line, but deep to it below the line).

The rectus abdominis originates from the pubic bone. Its fibers have a parallel orientation and travel superiorly to their insertion on the xiphoid process and the 5th-7th ribs, forming a strap-like muscle architecture.

Note: The table below only features exercises that target the abdominals directly. 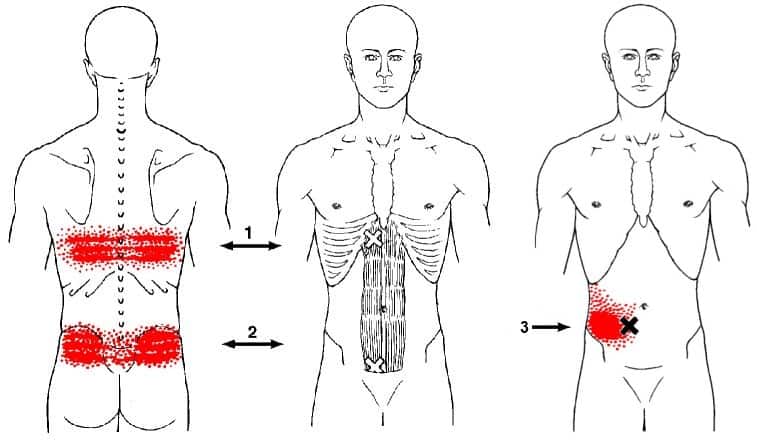 Author
Alex
Hey! My name is Alex, and I'm the owner and author of King of the Gym. I started this website back in late 2009 during college, and it has been my pet project ever since. My goal is to help you learn proper weight training and nutrition principles so that you can get strong and build the physique of your dreams! Read more about me here.
Share10
Pin4
Tweet
14 Shares