The lower trapezius (G. trapeza, four-sided or four-legged table.) is not an individual muscle, itself, but rather it is the lowermost section of fibers in the trapezius muscle. It acts on the scapula, with its main role as the prime mover in scapular depression.

Also worth noting is its important role as a scapular stabilizer: it is a synergist in scapular upward rotation, which is required for raising the arm overhead through a full range of motion.

It is a superficial posterior axioappendicular (extrinsic shoulder) muscle, located on the thoracic spinal region of the back. It’s in the most superficial layer of muscle, sitting atop portions of the rhomboids, lats and infraspinatus.

The lower trapezius originates from the lowest six thoracic vertebrae. It has parallel-oriented fibers that run superolaterally and converge as they approach their insertion on the medial scapular spine.

The lower traps, much like the middle traps, is an oft-ignored muscle. Most people don’t even know it exists, thinking the upper traps make up the entire trapezius muscle…

…People’s lack of awareness of the lower traps is one reason why it is weak in the vast majority of people, weight trainees, athletes and general population alike.

Note: Most of the Y exercises can be done unilaterally (one arm at a time). This can improve activation and technique when first starting lower trapezius training.

The various I, T and W exercises, which target the rhomboids and middle trapezius (and external rotators), also work the lower traps significantly, albeit less directly than the Y exercises.

The following stretches are the same as those for the rhomboids.

When using these techniques, give special attention to the trigger points labeled TrP3 and TrP4 in the image below. 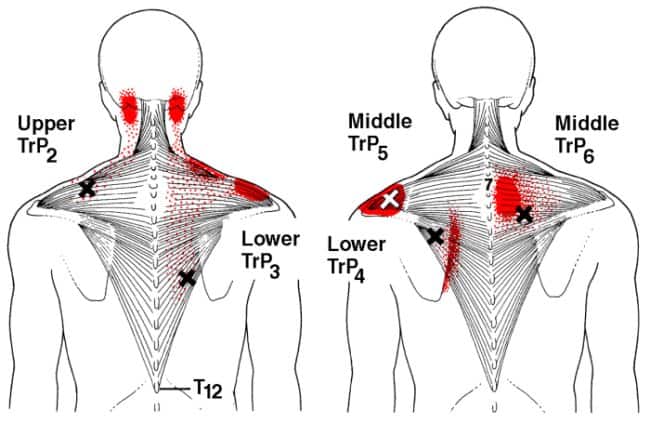 Author
Alex
Hey! My name is Alex, and I'm the owner and author of King of the Gym. I started this website back in late 2009 during college, and it has been my pet project ever since. My goal is to help you learn proper weight training and nutrition principles so that you can get strong and build the physique of your dreams! Read more about me here.
Share15
Pin35
Tweet
50 Shares