The brachioradialis (G. brachion, arm. L. radius, stake or rod [shape of radius bone]) is a large forearm muscle, whose name refers to its connection between the upper arm and radius. 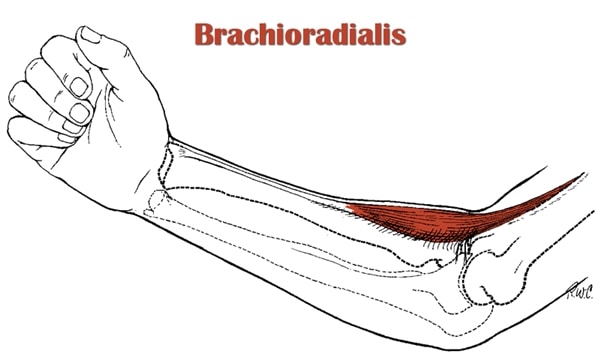 It is located in the superficial posterior compartment of the forearm, which includes many of the wrist extensor muscles…

…But unlike the wrist extensors, the brachioradialis is mostly visible from the anterior and lateral sides of the forearm, as opposed to posterior side.

And it doesn’t act on the wrist or digits, either. Rather, it’s main action is elbow flexion, though it is weak compared the brachialis and (depending on forearm rotation) biceps brachii.

Despite being a relatively small muscle, a well-developed brachioradialis muscle is essential for overall arm aesthetics. It gives you a thick upper-outer forearm, which “ties in” to the brachialis and long head of the triceps on the lower-outer part of the upper arm.

The brachioradialis arises from outside of the distal humerus. Its parallel-oriented fibers create a fusiform muscle shape as they run down forearm and insert near the thumb-side of the wrist on the radius.

Author
Alex
Hey! My name is Alex, and I'm the owner and author of King of the Gym. I started this website back in late 2009 during college, and it has been my pet project ever since. My goal is to help you learn proper weight training and nutrition principles so that you can get strong and build the physique of your dreams! Read more about me here.
Share
Pin1
Tweet
1 Shares