If you buy through a link on my site, I may earn an affiliate commission at no extra cost to you. Learn more.
By Alex
Last updated on February 21, 2018

The lateral deltoid (L. latus, side ; deltoides, triangular) is the outermost head of the deltoid and is primarily responsible for performing shoulder abduction.

The lateral deltoid is part of the scapulohumeral (intrinsic shoulder) muscle group. 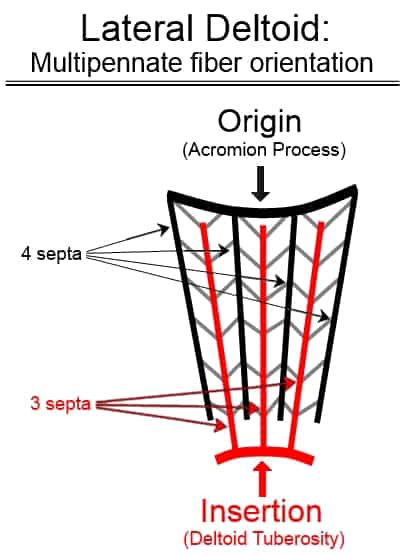 It is situated between the anterior and posterior deltoid, and lies superficial to the insertions of the supraspinatus, infraspinatus and teres minor.

It originates from the acromion process on the scapula and inserts on the upper arm at the deltoid tuberosity.

The anterior and posterior fibers of the deltoid, in contrast, have a parallel fiber orientation.

Note: The table below only includes exercises that directly target the lateral head of the deltoid. However, it’s worth noting that the side delt gets an indirect training effect from most posterior deltoid exercises.

Author
Alex
Hey! My name is Alex, and I'm the owner and author of King of the Gym. I started this website back in late 2009 during college, and it has been my pet project ever since. My goal is to help you learn proper weight training and nutrition principles so that you can get strong and build the physique of your dreams! Read more about me here.
Share1
Pin2
Tweet
3 Shares