If you buy through a link on my site, I may earn an affiliate commission at no extra cost to you. Learn more.
By Alex
Last updated on March 13, 2019 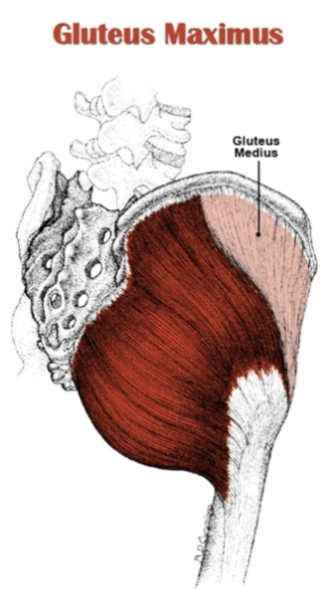 The gluteus maximus (G. gloutos, buttock. L. maximus, largest.) is not only the largest buttock muscle, but the largest muscle in the human body, period.

Its main responsibility is hip extension, and it’s classified as part of the superficial gluteal region.

The gluteus maximus is the outermost buttock muscle.

It lies superficial to the gluteus minimus and the majority of the gluteus medius, as well as the obturators, piriformis, gemelli and quadratus femoris (i.e. the hip external rotators).

The gluteus maximus originates from the external surface of the ilium, and the posterior sacrum and coccyx. It inserts on the gluteal tuberosity and IT band.

It has an oblique fiber orientation, with fibers running obliquely toward either side of several tendinous septa running through the muscle, giving it a multipennate muscle architecture.

Note: The table below is limited to exercises that train the gluteus maximus directly. That said, many of the compound exercises are also considered direct exercises for the hamstrings (e.g. Romanian deadlift), quadriceps (e.g. squat) and lower back (e.g. deadlift).

Similarly, the gluteus maximus gets a significant amount of indirect training from some direct exercises for the hamstrings (e.g. glute-ham raise) and lower back (e.g. back extension).

Author
Alex
Hey! My name is Alex, and I'm the owner and author of King of the Gym. I started this website back in late 2009 during college, and it has been my pet project ever since. My goal is to help you learn proper weight training and nutrition principles so that you can get strong and build the physique of your dreams! Read more about me here.
Share3
Pin15
Tweet
18 Shares