If you buy through a link on my site, I may earn an affiliate commission at no extra cost to you. Learn more.
By Alex
Last updated on October 28, 2019

The serratus anterior (L. serratus, saw ; anterior, front.), named for its saw-like appearance, is located on the side of the ribcage. 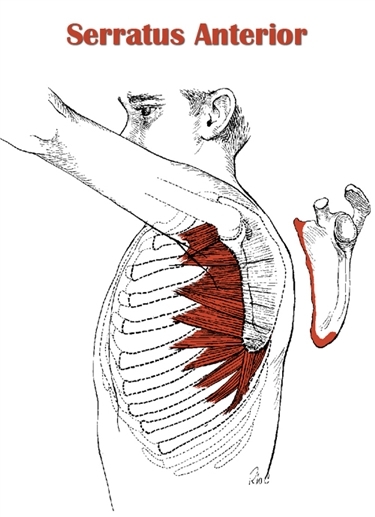 It acts on the scapula and is the prime mover in both scapular protraction and scapular upward rotation.

It’s also a key scapular stabilizer, keeping the shoulder blades against the ribcage when at rest and during movement.

Classified as an anterior axioappendicular muscle, the majority of the muscle lies deep to the scapula, subscapularis and parts of the pectoralis major and latissimus dorsi.

The anterior part of the lower fibers are visible on the physique at low body fat percentages.

The serratus anterior arises from the top nine ribs and wraps posteromedially around the ribcage, passing beneath the scapula. It inserts on the underside of the scapula on its medial border.

As the muscle extends from the ribs, it is divided by tendinous septa into nine finger-like groupings of muscle fibers called “digitations.”

The fibers run obliquely (to varying degrees) between these septa, forming a multipennate muscle architecture.

Fun Fact: The lowest four digitations of the serratus anterior interdigitate with the fibers of the external oblique, creating an aesthetic “tie-in” area that can be observed at a low body fat.

Note: The table below only includes the exercises that most directly target the serratus anterior.

The serratus anterior is trained indirectly in all anterior deltoid exercises. It is also hit to some extent in the select few chest exercises that involve scapular protraction (i.e. clap push up or similar variations).

Author
Alex
Hey! My name is Alex, and I'm the owner and author of King of the Gym. I started this website back in late 2009 during college, and it has been my pet project ever since. My goal is to help you learn proper weight training and nutrition principles so that you can get strong and build the physique of your dreams! Read more about me here.
Share4
Pin19
Tweet
23 Shares