The middle trapezius (G. trapeza, four-sided or four-legged table.) refers to the middle section of fibers in the trapezius, between the upper and lower trapezius fibers.

It acts on the scapula and is the prime mover in scapular retraction.

The middle trapezius is grouped as a superficial posterior axioappendicular (extrinsic shoulder) muscle. It’s situated between the top of the shoulders, and lies superficial to portions of the rhomboids, latissimus dorsi and infraspinatus.

It arises from the top five thoracic vertebrae. Its parallel-oriented fibers extend laterally and insert along the top of the scapular spine to the acromion process.

The middle trapezius, in conjunction with the upper and lower trapezius, takes on a radiate muscle shape.

Unfortunately, the middle (and lower) trapezius fibers don’t get the respect they deserve. Most people mistakenly believe the upper traps constitute the entirety of the trapezius. And it’s a damn shame, I tell you!

Note: The lists below only include back exercises with a focus on scapular retraction, which is the main action of the middle trapezius. I should point out that these are the exact same exercises that target the rhomboids.

Also, note that most of the different T, W and I exercise variations can be done unilaterally.

The following stretches are the same as those for the rhomboids:

When using these techniques, give special attention to the trigger points labeled TrP5, TrP6 and TrP7 in the image below. 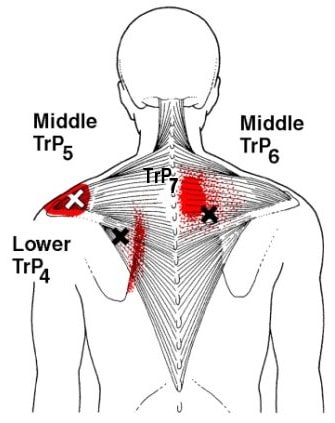 Author
Alex
Hey! My name is Alex, and I'm the owner and author of King of the Gym. I started this website back in late 2009 during college, and it has been my pet project ever since. My goal is to help you learn proper weight training and nutrition principles so that you can get strong and build the physique of your dreams! Read more about me here.
Share12
Pin37
Tweet
49 Shares