The posterior deltoid (L. posterior, behind ; deltoides, triangular) refers to the rear head of the three-headed deltoid muscle.

It acts on the shoulder joint and is the prime mover in shoulder horizontal abduction.

Located on the back of the shoulder – medial to the lateral deltoid and lateral to the middle trapezius – the posterior deltoid is classified as a scapulohumeral (intrinsic shoulder) muscle.

As part of the outermost layer of muscle, the posterior deltoid lies superficial to portions of the infraspinatus, teres minor and teres major.

It originates from the scapular spine and inserts on the upper arm at the deltoid tuberosity.

The posterior deltoid fibers have a parallel orientation and run inferiorly from origin to insertion.

Note: All exercises listed below target the posterior deltoid directly. However, there are other movements that train the rear delt indirectly, including row variations (see rhomboid exercises for specific examples) and lat exercises involving vertical pulling (e.g. pull up, lat pulldown) 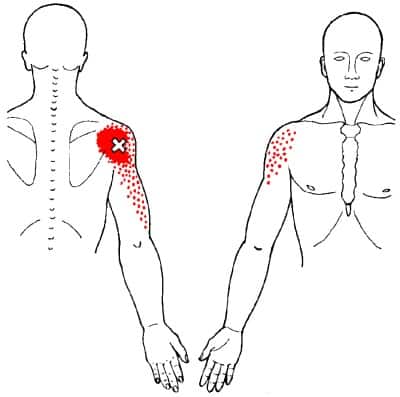 Author
Alex
Hey! My name is Alex, and I'm the owner and author of King of the Gym. I started this website back in late 2009 during college, and it has been my pet project ever since. My goal is to help you learn proper weight training and nutrition principles so that you can get strong and build the physique of your dreams! Read more about me here.
Share1
Pin14
Tweet
15 Shares