The gluteus medius (G. gloutos, buttock. L. medius, middle) is the second largest of the three gluteal, or butt, muscles. 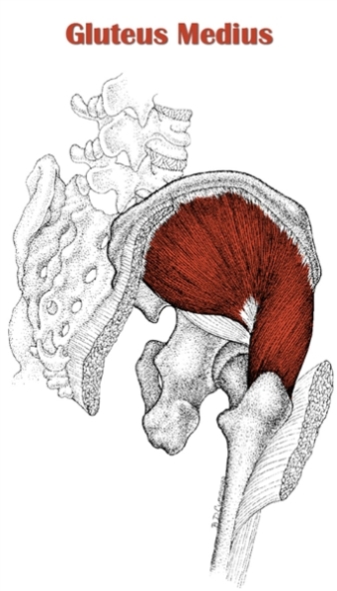 It is a fan-shaped muscle, whose main action is hip abduction. It is also noted for its essential role as a hip stabilizer in the gait cycle.

The gluteus medius is classified as part of the superficial gluteal region.

Only the anterosuperior 1/3 of the muscle is left uncovered by the gluteus maximus, though that portion is actually deep to the gluteal aponeurosis, making the gluteus medius virtually hidden from the surface of the body even at low body fat percentages.

From a broad origin on the external surface of the ilium, the parallel-oriented gluteus medius fibers run inferomedially from either end of the muscle relative to its midline.

The fibers converge as they insert on the lateral greater trochanter, giving the gluteus medius its fan-like, or radiate muscle shape.

Note: Although most sources agree that the gluteus medius is a radiate muscle with a parallel fiber orientation, some sources class it as a multipennate muscle.

Note: These are the same stretches used for stretching the gluteus minimus.

Author
Alex
Hey! My name is Alex, and I'm the owner and author of King of the Gym. I started this website back in late 2009 during college, and it has been my pet project ever since. My goal is to help you learn proper weight training and nutrition principles so that you can get strong and build the physique of your dreams! Read more about me here.
Share1
Pin33
Tweet
34 Shares