Female Soldier: How Do I Bust Through My Fat Loss Plateau? – Weight Lifting Q&A 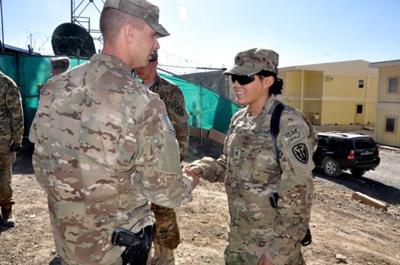 Question: Hey Alex, I am at a fitness/fat loss plateau, and it sucks! First off, I am a female so when I say I can bench 170 lbs., don’t think “wow he is small.”

Anyways, with that said, I do a lot of heavy weight training and I have very lean muscle.

My issue now is I can’t seem to cut out the fat. I want to tone up and show my “girly” muscles more but I can’t seem to lose the baggage. I even started implementing more cardio.

As for diet, we don’t have the best selections of food (if any) and I end up eating nothing but plain iceberg lettuce and either fish or turkey (if there’s any) everyday.

I know I am probably not getting enough nutrients throughout the day. Are there any meal supplements and non-perishable foods that I can have sent to me that may help?…

…I refuse to eat nasty “cheese burgers” and MREs which contain 3000 calories per package.

I haven’t seen much improvement so what is a soldier to do?

Answer: Hi Leah, thanks for the question. First off, let me mention that just the other day, I responded to a similar question from a woman trying to lose stubborn fat. It has relevant advice and is worth reading.

Now, I’ll get back to answering your question: The main problem is your diet, though there’s one potential issue with your cardio that I’ll address later.

With regard to your diet: if you’re not getting the proper amount of the right nutrients, your body won’t react in the way you want it to…

…In your case, doing what you’ve been doing up until your recently encountered plateau, has been sufficient for getting to your current bodyfat percentage.

However, it is particularly important for you to be precise in your diet from this point on, because fat loss becomes an increasingly more challenging and slow process as you reach lower and lower bodyfat percentages.

From what I got out of your message, I see 3 glaring problems with what you’re doing. Once fixed, I’d be surprised if you didn’t see almost immediate and significant improvement.

In the following sections, I’ll explain and provide solutions for each of these 3 problems.

On a good day, it sounds like the most protein you get is from one or maybe two servings of fish or chicken.

If this is indeed accurate, then that means you’re eating a mere 50 grams of protein per day, at the most. That’s far from sufficient.

My general rule of thumb is to eat at least 1 gram of protein per lb. of bodyweight.

However, it’s ideal to consume up to 1.5 grams of protein per lb. of bodyweight for someone like you, who is not only trying to lose fat, but who also lives a physically demanding lifestyle as a soldier…

Well, consider first that protein is “muscle sparing.” That is, it prevents or at least minimizes the loss of muscle mass.

Increased protein intake is crucial on fat loss diets, since that is when you’re most vulnerable to muscle loss due to the caloric deficit and being in a necessarily catabolic state…

…Plus, your active lifestyle (outside of training) raises your ability to utilize more protein for the purpose of repairing the additional muscle tissue breakdown caused by your increased activity level.

Let’s do a quick example for calculating protein needs. If you weigh, say 120 lbs., that means you should get between a minimum of 120 grams per day and a maximum of 180 grams per day.

Obviously it’s impossible to get anywhere near that amount of protein with your current food selections (or lack thereof). Therefore, I recommend these foods and food supplements:

If you’re going to be in Afghanistan for at least a few more months, definitely buy in bulk.

2. You are eating too few calories and doing too much exercise.

It sounds counterintuitive, but eating too little and exercising too much makes fat loss harder, despite the fact that you’re creating a larger caloric deficit.

Though not everyone experiences drop-offs in fat loss progress with a low food intake and high activity level, it is a relatively common phenomenon. And it is more often seen in women than in men.

The reason for this is not fully understood.

Often, it’s incorrectly attributed to so-called starvation mode, which is the idea that a massive caloric deficit causes your metabolism to crash in order to conserve energy and preserve bodyfat.

While there is evidence that large caloric deficits can slow your metabolism down more than expected, it is not significant enough to make up for the large deficit. Thus it can’t stop weight/fat loss…

…See this interview with Lyle McDonald, a nutrition expert, for more on the starvation mode “myth.”

So what is at the root of this phenomenon?

As mentioned earlier, there’s not enough evidence for a consensus. That said, I like Lyle McDonald’s theory.

He hypothesizes that chronically elevated cortisol levels may be the culprit for stalled fat loss on excessively low calorie and high activity regimens like yours.

He reasons that a grossly insufficient caloric intake combined with excessive exercise are constant and compounding “stresses” on your body.

Since your body responds to stress stimuli by secreting cortisol, it is continuously exposed to cortisol.

These chronically high cortisol levels have many negative health effects. One such effect relating to fat loss is increased water retention.

Water retention hides fat loss progress you might have already had, but not noticed.

And if that wasn’t enough, chronic cortisol exposure also encourages muscle loss; especially when you’ve got a large caloric deficit.

In the worst case scenario, you could actually be losing muscle at an accelerated pace while simultaneously accumulating fat.

Sounds bad, I know. But is all hope lost? No way!

All you gotta do is eat more (especially high-protein foods) and drop the cardio. Again, I know it sounds counterintuitive, but just give it a try.

Some possible non-perishable food items (again, I recommend getting in bulk) that will help you get enough calories, include the following:

There’s one supplement I’ll recommend in this section. Namely, fish oil. You can read my page on the best fish oil supplements to learn more about this supplement.

But to give you a quick summary, it’s contains certain fatty acids (EPA & DHA) that are incredibly important for general health, and heart health in particular.

I recommend it to everyone, unless they already eat tons of fatty fish. I personally take this one:

3. You aren’t getting enough micronutrients.

Your diet lacks not just a sufficient quantity of food, but also a variety of quality nutritious foods. This means that you probably have multiple vitamin and mineral deficiencies.

Obviously, micronutrient deficiencies aren’t good for general health, but they also interfere with your ability to lose fat efficiently. This is because your body is unable to properly or sufficiently carry out normal cell functions, many of which play a direct or indirect role in fat loss.

You’ll solve much of this problem once you start eating more and better foods..

However, it’s still a wise idea to take a multivitamin/multimineral supplement because it’s hard to get all your daily micronutrient needs from your diet alone, even when you have a much bigger variety of food options at your disposal.

I recommend you get a multivitamin that contains iron, like this one

and take 1-2 servings per day.

Taking one with iron is especially important for two reasons:

The daily recommended intake for the average 19-50 year old woman is 18mg/day. But since you’re so active, you’d need more. A total daily intake of 25-30mg in total is a safe and reasonable goal for you.

If you’re uncertain about any other aspects of your regimen, you’re almost guaranteed to find the answers in my bodybuilding diet guide or weight lifting guide.

Lastly, the fact that you’re in Afghanistan on active duty makes it a bit more difficult for you to always get enough protein and calories, all the time…

…Don’t sweat it if uncontrollable circumstances sometimes prevent you from meeting your daily dietary intake goals.

As long as you meet or come close to your goals as often as you can, then you will undoubtedly be leaps and bounds ahead of where you are now.

Keep up the dedication, and stay safe over there!

P.S. I was looking up MREs, and apparently they aren’t 3000 calories. According to this and this, the 3000 calorie thing is a bit of a myth, and the usual MREs around 1200 calories. I have no idea if that’s right, but I found it interesting nonetheless.

Author
Alex
Hey! My name is Alex, and I'm the owner and author of King of the Gym. I started this website back in late 2009 during college, and it has been my pet project ever since. My goal is to help you learn proper weight training and nutrition principles so that you can get strong and build the physique of your dreams! Read more about me here.
Share1
Pin3
Tweet
4 Shares