If you buy through a link on my site, I may earn an affiliate commission at no extra cost to you. Learn more.
By Alex
Last updated on March 28, 2022 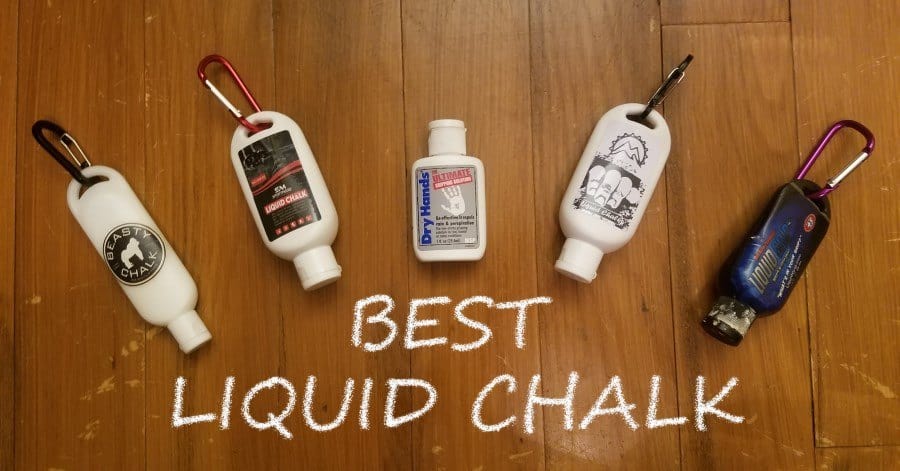 How many times have you been lifting and your grip starts to slip before your muscles fatigue? You don’t need to be an elite-level powerlifter to feel the frustration that comes from grip slip.

The solution? Chalk. There are two basic types of chalk: powder chalk and liquid chalk.

I’ll compare these different types of chalk below, but the focus of this article will be about choosing the best liquid chalk for lifting.

If you’re in a hurry, I’ve included a summary of my rankings for the top liquid chalk brands below — it’s based on my personal experience using each one.

I’ve got plenty more to discuss on the topic of liquid chalk. Plus, I’ll be doing a detailed review of each of the five liquid chalk brands shown in the above chart. Use the table of contents below if you want to jump to a specific topic.

What Is Liquid Chalk?

Just as the name implies, liquid chalk is a fluid form of chalk. Liquid chalk is often made from the same material as powder chalk: magnesium carbonate, which has been shown to be most effective at doing away with perspiration and improving grip quality.

While powder chalk is considered superior for performance due to better functionality, its negatives often outweigh its positives for many lifters.

I’ll discuss the pros and cons of chalk powder compared to liquid chalk in the following section.

Liquid chalk is becoming more popular to use than the traditional chalk powder and there are a few reasons for this: it’s more convenient, all gyms allow it and it’s less messy.

However, powder chalk is still very popular due to its superior functionality. In fact, it’s the standard choice in some serious strength-focused gyms, and also a favorite of most home gym lifters.

Let’s break down the major differences between liquid chalk and chalk powder.

If you’ve ever used traditional chalk powder before, you know only too well how it can quickly turn the room into something that looks like a baby powder bottle exploded.

Traditional chalk is plain messy. It can stain clothing and equipment. In the least, it leaves a bothersome residue.

Liquid chalk offers almost no mess when used. You apply the liquid directly to your hands, rub them for a few seconds, and your grip is ready to go. No mess and no hassle. You might get a few smudges on your clothes if you rub your hands on them, but it won’t be very noticeable and can easily be rubbed away.

When it comes to superior functionality, traditional powder chalk has the upper hand. One application of powder chalk will easily take you through multiple sets, if not multiple exercises, depending on intensity, exercise type, and sweat amount.

Traditional chalk offers a smooth and dry grip right from the start. Without the waiting around for it to dry, you may be more product, achieve more sets, and have an overall better workout. With that said, powder chalk can quickly become a nuisance depending on the environment you’re in.

Powder chalk has an appropriate time and place. For example, if you are visiting a gym that specializes in Olympic lifting and powerlifting then you’ll most likely see everyone using powder chalk. Take a powder chalk block into your average commercial gym where you’re surrounded by people who have never even seen or used chalk before: this is not the time or place.

As I’ll expand on below, many gym owners are banning the use of traditional powder chalk. This is where liquid chalk can save the day. Not only does it provide the grip improving benefits of traditional chalk but it does so without the mess, which could frustrate those around you.

Traditional dry chalk may not be welcome in your local gym. Many gym owners have banned the use of chalk powder because they don’t want to get stuck cleaning up the mess or have other gym patrons have to deal with breathing in a chalk cloud.

From a cost standpoint, chalk powder is a clear winner over liquid chalk. No question about it. You can buy a full 1 lb. of block chalk for about $10-15 depending on where you buy it.

When I trained at my old home gym or in gyms that allowed powder chalk, this amount would easily last me 2+ years, and I probably use more than the average lifter.

You can’t beat the price per application of powder chalk. Here’s a pic of me holding one of eight blocks of chalk that comes in the 1 lb. “Gym Chalk” box.

Compare that to liquid chalk, which typically costs the same, but only lasts between 1-3 months, typically. I probably use more than the average lifter, due to my propensity for sweating — so others may be able to stretch a bottle out to 4 or 5 months.

How to Use Liquid Chalk

Using liquid chalk is pretty straightforward but here are a few pointers that you’ll want to keep in mind:

What to Look for When Buying Liquid Chalk

If you want to find the best liquid chalk for lifting then there are certain things you’ll want to look for when browsing.

How well does the liquid chalk improve your grip?

How quickly does the liquid chalk dry?

How strong is the smell from the product?

How much do you need of the liquid chalk to have an effective grip?

How thick or runny is the chalk when you squeeze it out of the bottle onto your hands?

How does the liquid chalk feel while you are applying and after it dries?

Duration of a Single Application

How long does the liquid chalk last within the first few minutes?

Longevity of an Entire Bottle

How long can you stretch out the lifespan of the bottle?

After testing all five products, Dry Han​​ds is my clear choice for the best liquid chalk brand.

Produces by far the strongest and most tactile grip of all liquid chalk products tested.

I like to clip my liquid chalk container to my water bottle. Since Dry Hands doesn’t have a place for a clip, I wrapped a couple of rubber bands around the bottle and attached my own carabiner as shown in this photo. It’s sloppy, and I’m sure there’s a much more elegant workaround, but it does the trick!

Whenever I’ve bought Dry Hands Liquid Chalk, it would cost a little higher than average (price per oz) compared to its competition. Though it always lasts the longest. There’s a 1 oz version and a 2 oz. version. The prices fluctuate, so be sure to check the current price below:

If you want to have dry hands for your toughest sets or workouts, SportmediQ Liquid Chalk is the perfect runner-up to Dry Hands Liquid Chalk.

My Rating of SportmediQ Liquid Chalk: 4/5

When I’ve bought SportmediQ Liquid Chalk in the past, it came in a 1.69 oz bottle. It was around average or slightly lower than average in terms of price per oz compared to the other brands I was considering. Click the button below to see how much it costs now:

While I don’t think it lasts as long as Dry Hands, the Mosher Mountain Gear Liquid Chalk is definitely a top contender for the best liquid chalk for lifting.

I’ve bought the Mosher liquid chalk twice. It came in a 1.69 oz bottle. The price per oz was average compared to the other brands I was considering. Be sure to click below to see the current price:

Liquid Grip Liquid Chalk provides an excellent grip but this is overshadowed by how short-lived each application is. Still, not a bad buy if on-sale.

When I bought my first (and thus far, only) bottle of Liquid Grip liquid chalk, it came in a 1.5 oz bottle. It was average in terms of price per oz compared to the competition. Be sure to check the current price, below to see how it’s priced now:

The Beasty Chalk (Gorilla Edition) Liquid Chalk is ‘okay’ chalk overall. I initially had high hopes for it, but its flaws became apparent after more extensive use. It will get the job done if it’s your only option, but it wouldn’t be my first choice.

My Rating of Beasty Liquid Chalk: 3/5

When I bought Beasty Liquid Chalk in the past, it came with two 1 oz bottles (2 oz total). However, it appears they’ve since increased the volume by 50%, so you get two 1.5 oz. (3 oz. total). The price per oz when I bought it was competitive with the other brands I had been considering. Be sure to check the current price below to see the price now:

These five options are all great depending on your needs and budget but if there’s one brand that I believe is the best liquid chalk for lifting, it is Dry Hands Liquid Chalk.

I would compare using Dry Hands to wearing a thin glove. Your grip dramatically improves as soon as it dries. Unless you are performing powerlifting in a sauna, you don’t have to worry about constant re-application of the liquid chalk. This is going to save you time, hassle, and money.

From my experience, Dry Hands is one of the quickest liquid chalks to dry and this is important if you’re trying to follow a specific set of acute variables in your workouts such as a 60-second rest break. Another great feature of Dry Hands is that when it dries, you’re not left with this weird residue that feels like wax or gel. Instead, you have a nice and dry powder-like feel without the powder.

As far as how Dry Hands holds up during your average workout, I think it outperforms all other liquid chalks. Even during supersets or Olympic lifts, the stuff holds on for the ride. More intense workouts especially where you’re sweating more may require a second application but I doubt you’ll need more than two or three small applications during a workout.

If you want to ditch the chalk block, Dry Hands is the next step up.

Author
Alex
Hey! My name is Alex, and I'm the owner and author of King of the Gym. I started this website back in late 2009 during college, and it has been my pet project ever since. My goal is to help you learn proper weight training and nutrition principles so that you can get strong and build the physique of your dreams! Read more about me here.
Share1
Pin
Tweet
1 Shares

3 thoughts on “Best Liquid Chalk for Lifting: Get Better Grip with Less Mess”